Kirsha Kaechele and her husband David Walsh, the owner of MONA, in Tasmania, put up $100,000 for a Gun Buy Back in the 8th Ward in New Orleans. I was part of this show, my piece was actually in the Gun Buy Back area, so its audience were solely the people who came and gave up their guns. 500 were brought back and I am pretty sure that means lives were saved.

A recording studio was built around the corner, open to anyone who wants to come in and record some music, run by and technically supported by Mr Serv On, who I had the delight of teaching a bit of English slang to, which he turned into a rap instantly, can't quite wait to hear 'Get Your Snog On' ;-) and Sess 4-5, who continues to make me crack up when I remember him telling the in-house Kambucca maker that his concoction tasted of shoe water. The artist Lisa Lozano is going to stay and rally at their request, she is from New Orleans and you can see the roots growing out from her feet.

Here is some reading....

Here is the piece! 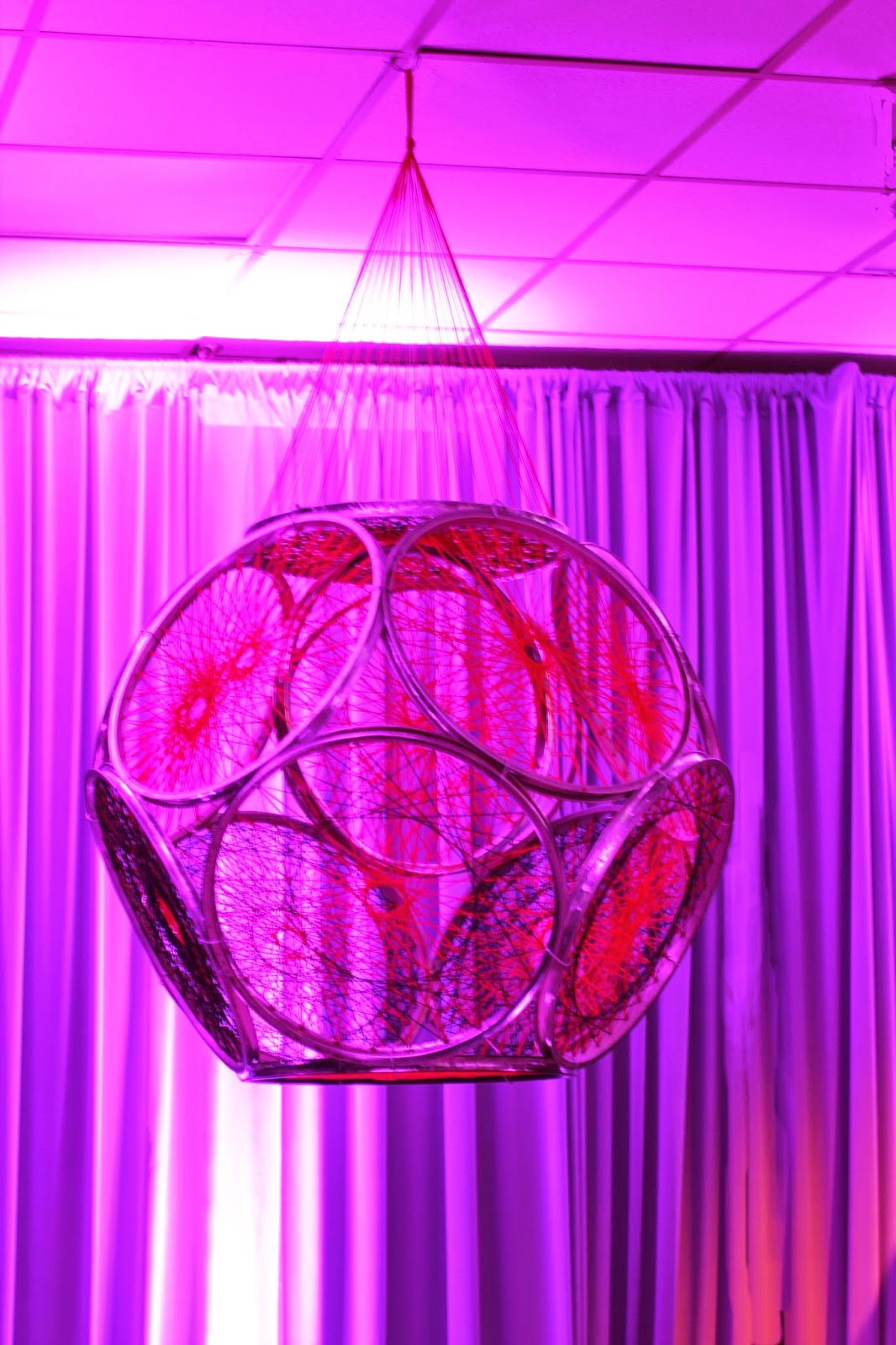 I could not have done it without the amazing kindness of Alex at Rubarbike, an incredible initiative right in the middle of a pretty difficult neighbourhood. It gives kids and locals a chance to earn bike dollars, by working to repair bikes, they knowledge the kids get from working allows them to build their own bikes, it was such a great atmosphere and Alex let me take 14 wheels for my piece, in return for the insides which I removed and returned to be recycled.

Truth is, I didn't make the piece I intended, I learnt a lot in the process and had to make some quick decisions since the space available changed and the impossibility of conveying the message intended dissolved at the 11th hour. Setting it up was harrowing, the police were milling around and the atmosphere was morose, plus I was pretty much crapping myself, never intending to ever go near a gun, suddenly they were all on their way to me! But at the end I was happy, thrilled, relieved, grateful, I hung the piece at the moment the cellist, Helen Gillet began to play and the guns began to roll in.

This is a bit about the piece that didn't get hung... 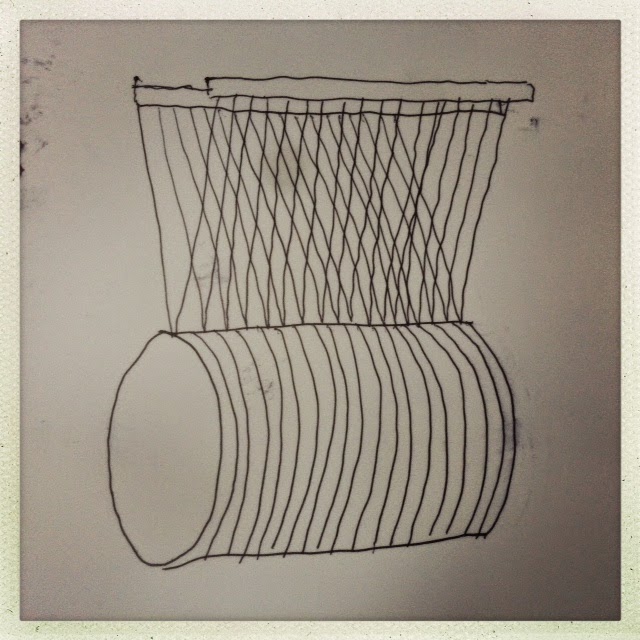 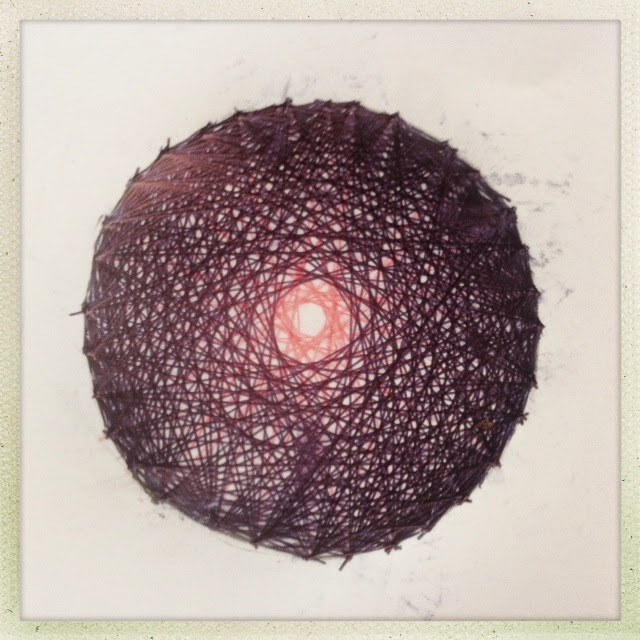 The Cycle of Perpetual Reciprocation

The piece came to me like a big bang. I have been making bicycle wheel pin art for 5 years now and it always amazes me, that with placement and colour you can tell a different narrative, even such contrasting ones as this piece, I usually use this model to describe some kind of creation, like the creation of the universe bursting from its embryo, the bicycle wheel representing the cycle of life and continuum of evolution. It is amazing that gun shots are there own kind of big bang and creation, the creation of a void.

The piece is reminiscent of a perpetual motion device, the back and forth, through the barrel of a gun. It removes the people entirely, since it is the device alone that makes killing so easy.

It has been difficult to work in such stark representative colours, the urge to tone it down, soften it up has vibrated my very being, but there is no softening possible and there is no sweetness about it 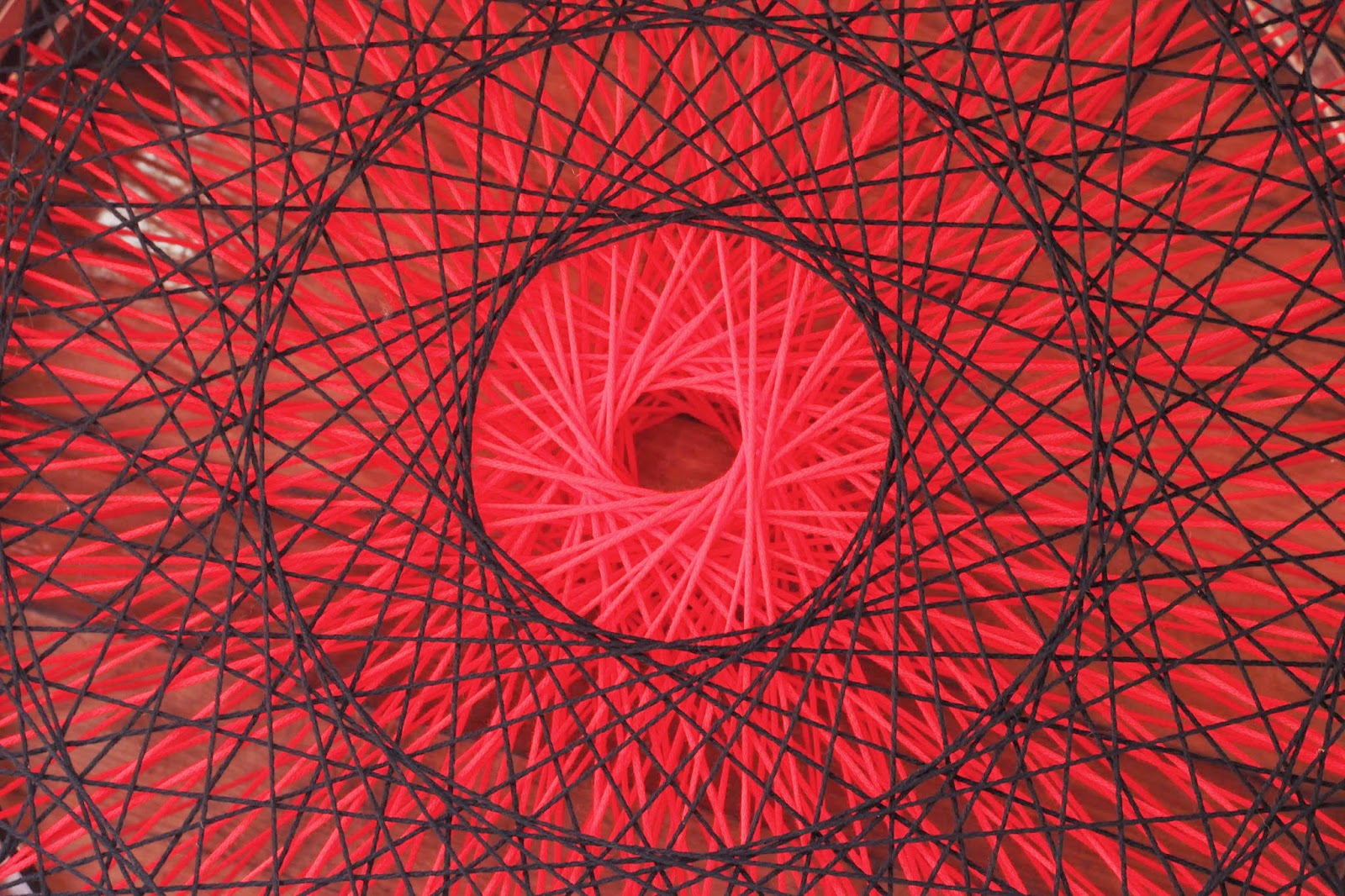 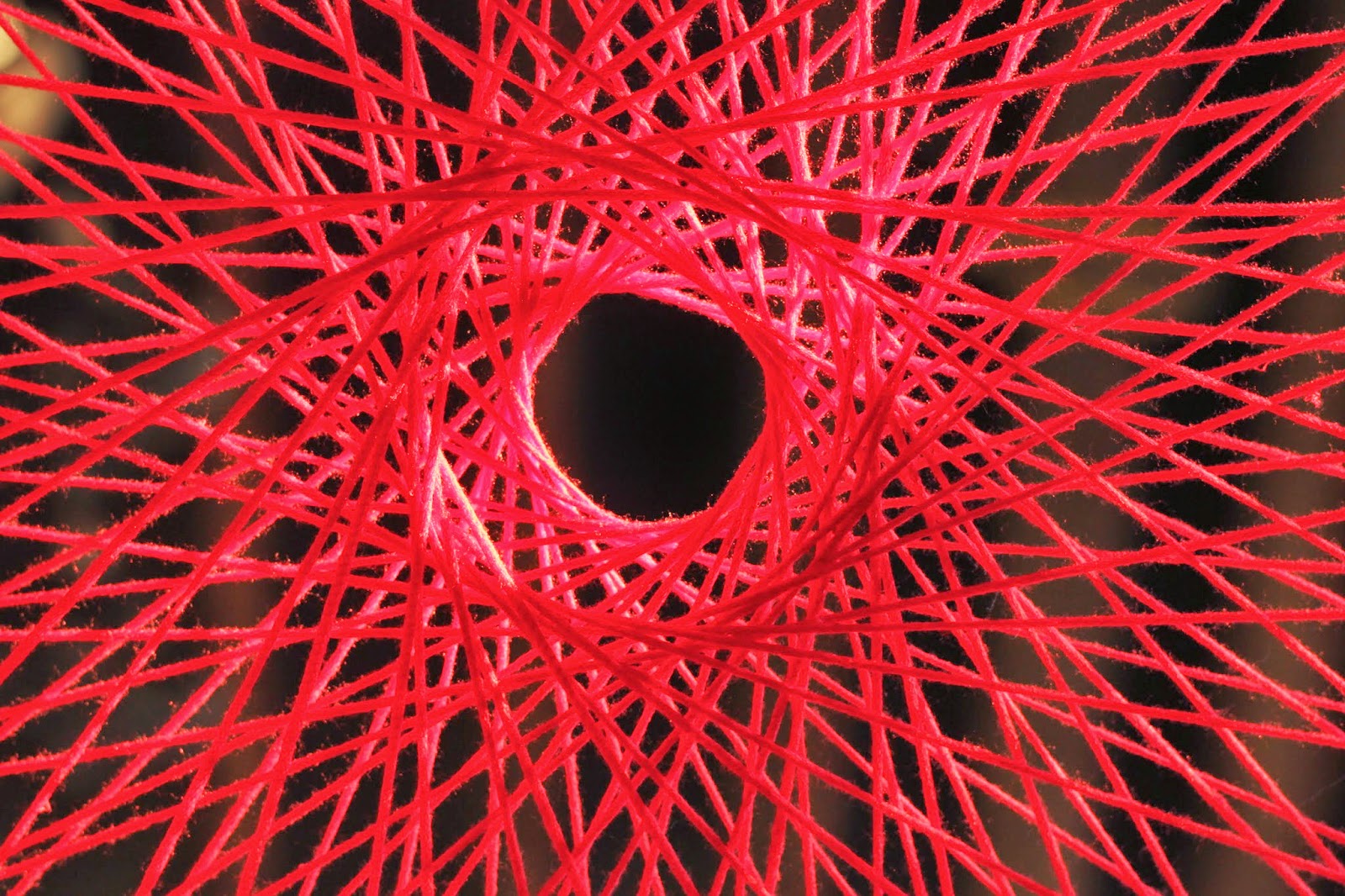 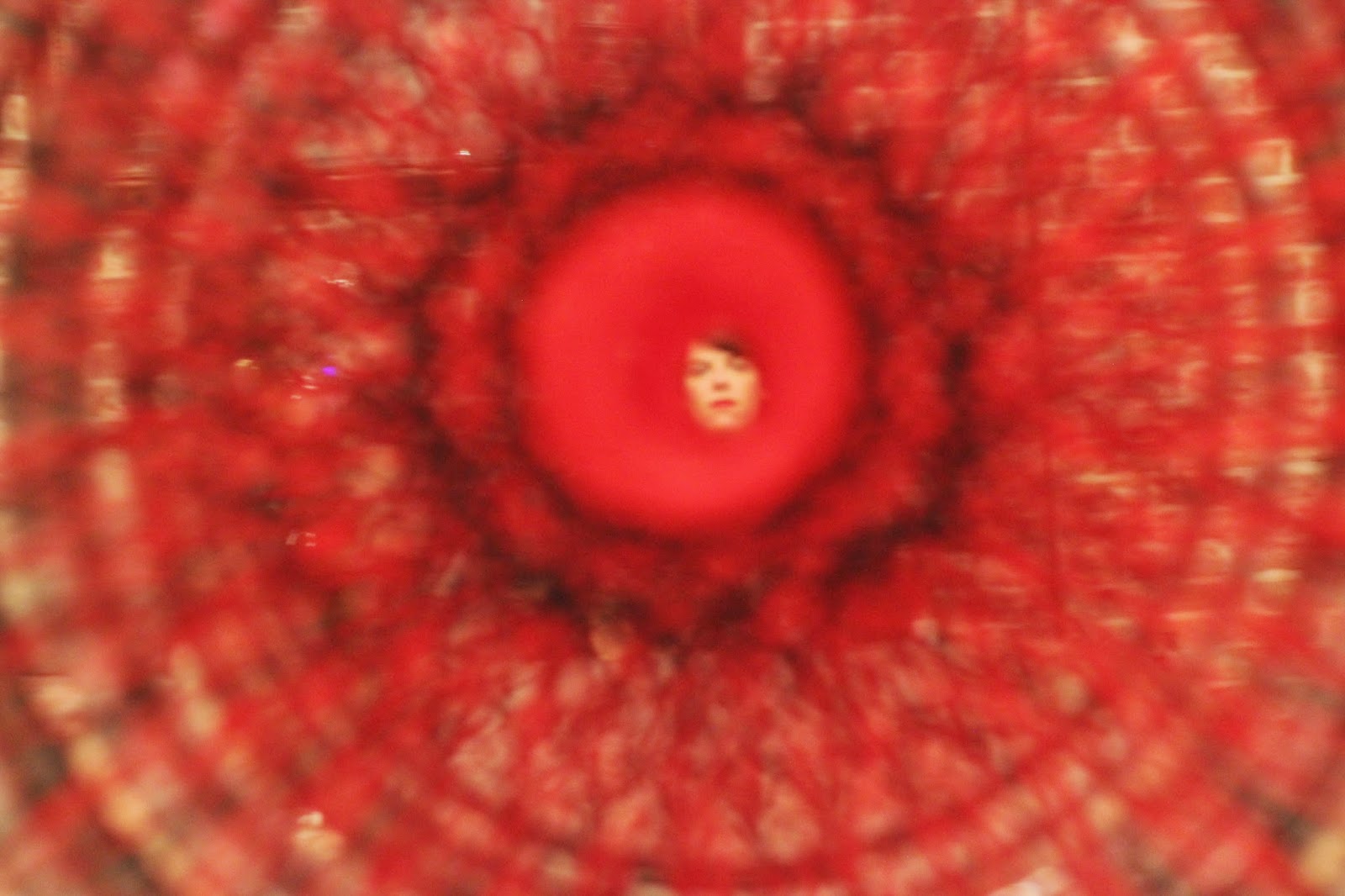 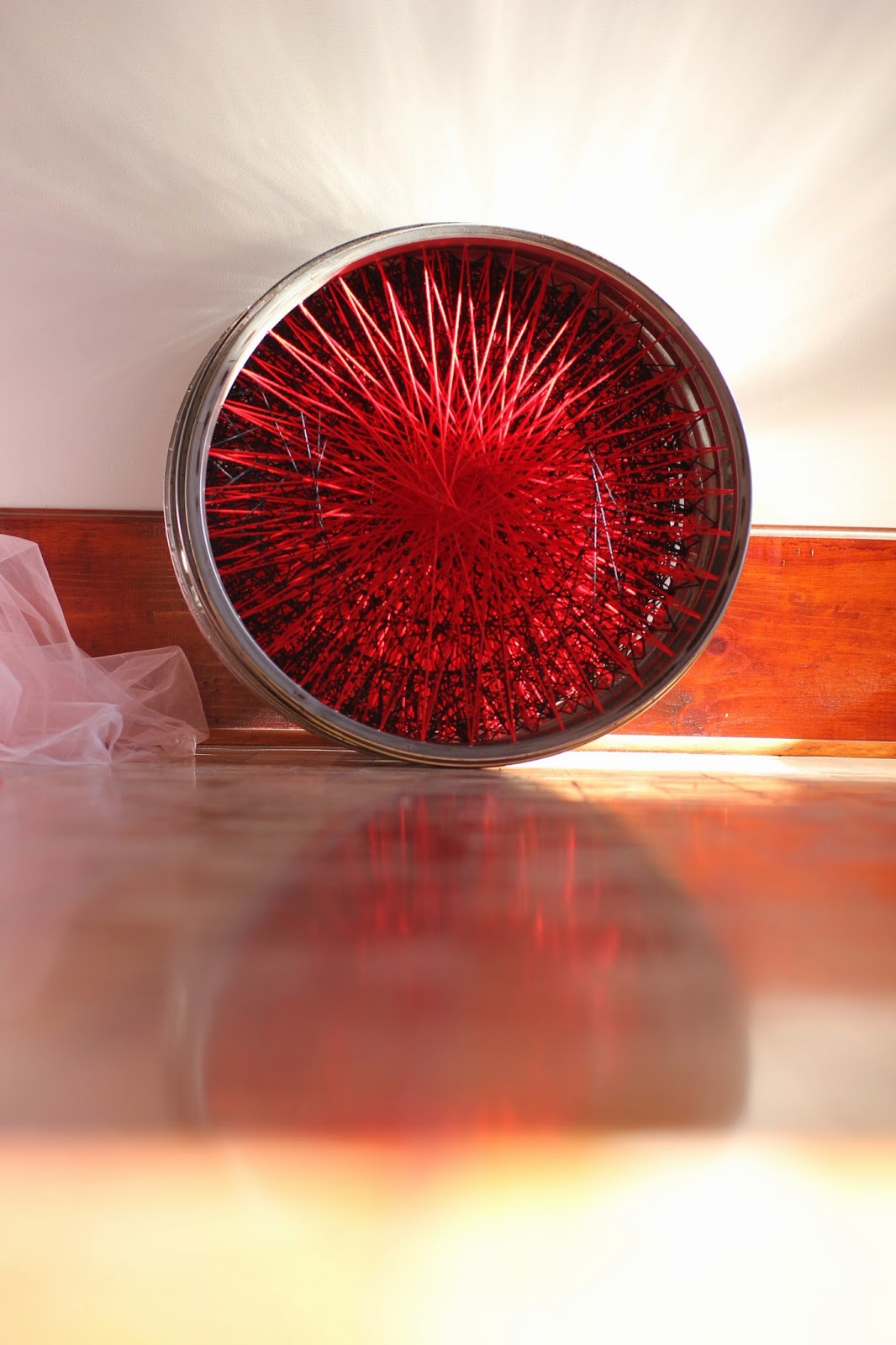 The blood drop came to me in the taxi deflated from an unsuccessful hang, but bolstered by Cat Glennon, who did some great last minute Art Mumming on me, further confirmed by talking with a friend John Orgon and came together when artist Daphane Park awoke from a nightmare after 3 hours sleep and all three of us set off at 7 o clock in the morning and showed it who was boss. I am so indebted to these two and VOILA! Isn't it beautiful!