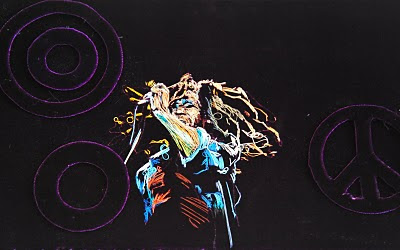 Do you remember when I got that commission to do a portrait of Bob Marley? Well in my usual spirit I was sewing until about 5mins before I left to catch the plane to deliver it to Virginia and never got any good photographs. I just received this the other day from the lady it was for. She was crazy about him and even had a mural painted along her basement wall that had two scuba-diving Bobs swimming in an underwater scene! I did a bit of research on him as I was a bit Bob'd out, if I heard Buffalo Soldier again I would have stuck pins in my eyes, but I watched some films on youtube of him performing and it was electric, with his hair swinging about like wild snakes.
Amazing.
Posted by Louise Riley at 02:59